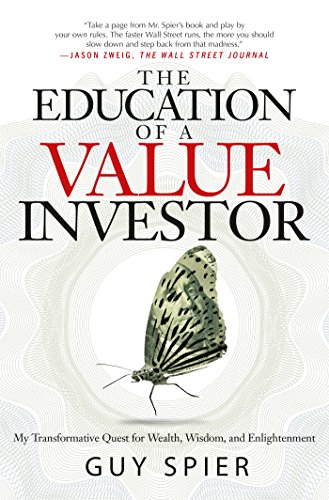 What happens when a young Wall Street investment banker spends a small fortune to have lunch with Warren Buffett? He becomes a real value investor. In this fascinating inside story, Guy Spier details his career from Harvard MBA to hedge fund manager. But the path was not so straightforward. Spier reveals his transformation from a Gordon Gekko wannabe, driven by greed, to a sophisticated investor who enjoys success without selling his soul to the highest bidder. Spier’s journey is similar to the thousands that flock to Wall Street every year with their shiny new diplomas, aiming to be King of Wall Street. Yet what Guy realized just in the nick of time was that the King really lived 1,500 miles away in Omaha, Nebraska. Spier determinedly set out to create a new career in his own way. Along the way he learned some powerful lessons which include: why the right mentors and partners are critical to long term success on Wall Street; why a topnotch education can sometimes get in the way of your success; that real learning doesn’t begin until you are on your own; and how the best lessons from Warren Buffett have less to do with investing and more to do with being true to yourself.Spier also reveals some of his own winning investment strategies, detailing deals that were winners but also what he learned from deals that went south. Part memoir, part Wall Street advice, and part how-to, Guy Spier takes readers on a ride through Wall Street but more importantly provides those that want to take a different path with the insight, guidance, and inspiration they need to carve out their own definition of success.